The Whisky Stramash Toasts Its Return to Edinburgh

The Whisky Stramash is toasting its return to Edinburgh this month with a pioneering new cocktail. An alternative to the traditional Bloody Mary, ‘Big Peat’s Breakfast’ is an innovative Sunday brunch drink for the 21st century.
Created using Islay’s characterful ‘Big Peat’ Blended Malt, bacon and a frothy egg-white top, this bespoke serve – which is based on a simple whisky sour recipe – is not your run-of-the-mill drink; but then neither is the event for which it was created.
Using the latest scientific techniques from the world of molecular gastronomy, it takes a little skill to make the bacon and egg white garnish – but it’s well worth the effort. 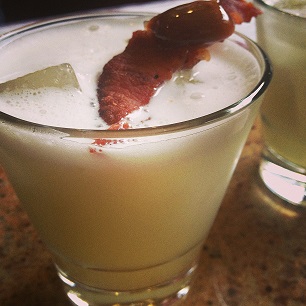 Here’s how to make it…
BIG PEAT’S BREAKFAST (2.3 units/ serves 1)
Ingredients:
• 50ml Big Peat Whisky
• The fat from a rasher of unsmoked bacon  – the ratio of bacon fat to whisky needs to be 1:10 so for 50ml of  whisky, you’ll need to add 5ml of bacon fat
• 30ml Lemon Juice
• 10ml Sugar Syrup (made with white sugar and water)
• ½ an egg white – this is shaken into the drink and results in the texture being thickened and the foamy head on top
For the garnish –
• A bottle of HP Sauce
• 4g Calcium Chloride
• Sodium Alginate
• Crispy bacon – after taking the fat for infusion this was baked off just before the event with olive oil
Method:
For the Fat-Washed Whisky –
Pour a miniature bottle of Big Peat Whisky into a Tupperware tub. Line a grill with tinfoil. Part-cook the bacon under the grill, catching the juice in the foil. Pour the bacon juices into the tub and put in the fridge to chill for 24 hours – shaking at regular intervals to help the flavours infuse. Freeze overnight to solidify the fats ready for filtration.
To filter the fats from the whisky, pour the mixture through a coffee filter -the whisky (which will not have frozen) will come out perfectly clear but packed full of bacon flavour.
For the Cocktail –
To make the syrup, mix two-parts sugar to one-part boiling water and stir until all the granules have dissolved.  Add this to a cocktail shaker along with the whisky, lemon Juice and egg white (shaking the egg white into the drink thickens it up).
For the Garnish –
Add the Calcium Chloride to a bottle of HP Sauce by mixing in a blender and decanting it back into the bottle. Prepare a bath of water mixed with Sodium Alginate in order to perform a process commonly known ‘Reverse Spherification’ – which involves carefully dropping a dollop of the HP Sauce mix into the Sodium Alginate bath. The reaction causes a skin to form around the outside leaving the inside still runny.
Lastly bake the partly grilled bacon used earlier with some olive oil to crisp it up. Add a rasher of crispy bacon and a lozenge of HP Sauce which bursts in the mouth.
For a step-by-step guide on how to make it visit http://solid-liquids.com/what-weve-done/whisky-stramash-launch-party/
Ends
Issued by The Big Partnership
For further information/images please contact Katie Lyle, Megan Davidson or Jessica Kiddle on 0131 557 5252 or email whiskystramash@bigpartnership.co.uk.

NOTES TO EDITOR
• The Whisky Stramash is organised by founding partners Darroch Ramsay and Scott Martin
• In 2012 the event attracted 2,100 attendees over two days (Male 61% / Female 39%)
• The male average age was 37 years, and female 34 years
• 1,500 cocktails were served