The Macallan is celebrating the 60th anniversary of Queen Elizabeth’s Coronation with the release of a stunning limited edition commemorative bottling.  The limited release comprises a beautifully designed box featuring two 350ml bottles of single malt whisky.   This latest offering is expected to become a rare collectors’ item with only 1953 bottles being released for sale in the UK.

The pack was designed by the acclaimed Art Director, David Holmes, who worked on the first ever advertising campaign for the brand and completes The Macallan’s trio of commemorative Royal bottlings.  The two bottles each feature a different image of The Queen, one taken in 1953 by Cecil Beaton, the celebrated photographer, who is perhaps best known for his images of Her Majesty Queen Elizabeth II, with the other featuring an image taken in 2004 by Julian Calder, one of the world’s most renowned portrait photographers.

In keeping with the distinct and stylish design of The Macallan, the labels have been created to celebrate Queen Elizabeth’s reign, with the first conveying the Queen as she was in 1953, aged just 26, and the second honouring the treasured monarch she has become today.

Commenting on the special commemorative Coronation edition David Holmes said:  “I just felt that the box design should reflect the coronation itself.  Bright and celebratory, with Gold, Windsor Red and Blue as used on the Queen’s Coat of arms.  The idea of the confident red box with gold florettes underlines the respectful presentation.  A sort of, must have, rare Royal treasure case.” 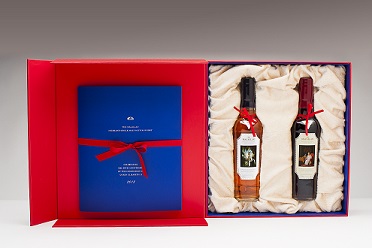 The representations of the earlier and later years of Her Majesty’s reign are depicted not only by the chosen images, but also through the two whiskies chosen by our Whisky Maker.  A lively expression, symbolic of the young Queen at the start of the new Elizabethan era, is complemented by a more complex malt to represent her monumental achievements of the past 60 years.
The first whisky, matured in American oak sherry seasoned casks, is a vibrant gold spirit offering a lemon and orange citrus nose.  Ginger and summer berries flit in the background showing the exuberance of youth while hinting at a founding level of maturity.  Matured in Spanish sherry seasoned oak casks, the second whisky is a splendid mahogany sprit and presents a richly mature, elegant and refined nose.  Nutmeg, ginger, rich fruits and resin soften to give a full mouth feel.  There is great maturity on the palate, yet no sign of age.

Ken Grier, Director of Malts at Edrington, commented:  “The Macallan is honoured to pay tribute to Her Majesty the Queen on the 60th anniversary of her Coronation.  This exclusive release brings together the creative talent of David Holmes, two stunning images of the Queen which further underpin our photography credentials and it has allowed us to marry these moments from the Queen’s remarkable reign with two very special whiskies.  We are proud of the whiskies we have created for this special bottling.  They both portray the character and nobility of the Queen at two very different stages of her life and we hope that people will enjoy the story they have to tell.”

The 1953 bottles are available from The Macallan Distillery Visitor Centre for collection only and online for UK customers at www.themacallan.com at a price of £350.

Issued by The BIG Partnership on behalf of The Macallan: www.themacallan.com

Tasting Notes:
Cecil Beaton Bottle (58.1% abv):
• Colour:  Gold
• Nose:  Vibrant. Lemon and orange strike a chord.  The enveloping warmth of vanilla, banana and cinnamon temper then develop to show grace.  Ginger and summer berries flit in the background showing the exuberance of youth, yet hint at maturity as the same time.  Soft oak underpins late on, talking only when required.
• Palate:  Ginger, cinnamon and wood spice drives the palate, opening up to show rich fruits and boiled sweets.  The subtlety of the oak softens all but does not distract.
• Finish:  Full and long finish.

Julian Caulder Bottle (55.7% abv):
• Colour:  Mahogany
• Nose:  Rich in maturity, elegant and refined.  Abundant in dried fruits, raisins, sultanas, dates and figs.  This is a world traveller.  Burnished oak has grown in stature developing depth and complexity.
• Palate:  Rich fruits, ginger, nutmeg and resin soften to give a full mouth feel.  Viscous and fruity, there is a great maturity on the palate yet no sign of age.
• Finish:  Never ending.