THE MACALLAN 1962 FINE AND RARE IS AUCTIONED FOR CHARITY

SIGNED BOTTLE OF THE MACALLAN 1962 IS AUCTIONED FOR CHARITY

Sotheby’s has auctioned a bottle of The Macallan 1962 from its fine and Rare collection, distilled the same year as the first Bond film was released, achieving an impressive £9,635.

Since this prestigious single malt whisky featured in key scenes in SKYFALL, the highest-grossing Bond film ever, The Macallan is thrilled to be part of its celebration and achievement by donating the rare bottle of whisky to the auction that commenced at this morning.  The bottle auctioned featured a unique signed label that included signatures from Bond himself, Daniel Craig, along with Javier Bardem and Bérénice Marlohe.

All proceeds of the auction will be donated to charities that support members of the British security and intelligence services, selected by Prince Charles to benefit from the SKYFALL world premiere held in October 2012.

David Cox, Director of Fine and Rare Whiskies, Edrington, owners of The Macallan, said “We are delighted with the result of today’s auction. Following on from The Macallan’s ‘cameo’ in SKYFA 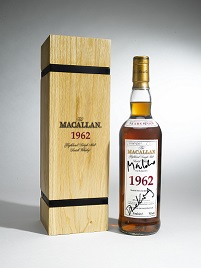 LL we were honoured to be able to take part in this prestigious, Finest & Rarest Wines sale and are ecstatic with the amount raised. The charities that will receive the monies raised are very fitting and will help support members of the British security and intelligence services.”

Today The Macallan is one of the world’s most collectable whiskies, sitting at the top of the auction table and the owner of the current Guinness World Record™ for the most expensive whisky ever sold at auction.

“The Macallan is a First Growth Malt, the tops, with all that this means in terms of excellence and excitement” comments Serena Sutcliffe MW, Sotheby’s International Head of Wine.

Sarah McDonald or Sarah Bailey at The BIG Partnership via email at firstname.lastname@bigpartnership.co.uk or telephone 0131 557 5252

About Sotheby’s
Sotheby’s Wine auctions in 2012 brought an overall global total of $64,462,965. Sotheby’s overall total of $88.27 million for global wine auctions in 2010 is the highest in the company’s forty-two years of wine auctions. 2011 brought an overall global total of US$85,467,096. The Lafite Ex Cellars sale – of First Growth Bordeaux directly from Château Lafite-Rothschild – held by Sotheby’s in Hong Kong in October 2010 set a new record for a single standard sized bottle at auction when a bottle of Château Lafite 1869 sold for $232,692.  This means that Sotheby’s now holds the world records for a standard bottle, a bottle in any format – the Jeroboam of Château Mouton Rothschild 1945 which fetched $310,700 in February 2007 in New York – and any wine lot at auction – 50 cases of Château Mouton Rothschild 1982 which sold for US$1,051,600 at Sotheby’s New York in 2006.

Sotheby’s has been uniting collectors with world-class works of art since 1744.  Sotheby’s became the first international auction house when it expanded from London to New York (1955), the first to conduct sales in Hong Kong (1973) and France (2001), and the first international fine art auction house in China (2012). Today, Sotheby’s presents auctions in 10 different salesrooms, including New York, London, Hong Kong and Paris, and Sotheby’s BidNow program allows visitors to view all auctions live online and place bids from anywhere in the world. Sotheby’s offers collectors the resources of Sotheby’s Financial Services, the world’s only full-service art financing company, as well as private sale opportunities in more than 70 categories, including S|2, the gallery arm of Sotheby’s Contemporary Art department, and two retail businesses, Sotheby’s Diamonds and Sotheby’s Wine. Sotheby’s has a global network of 90 offices in 40 countries and is the oldest company listed on the New York Stock Exchange (BID).