The batch release which will be sold across multiple international markets, was matured in First-Fill Sherry and Bourbon casks. Just 5,500 bottles will be available to purchase worldwide from 24th April 2019*.

Laid down in 2008 before being bottled in 2019, Benromach Cask Strength Vintage 2008 is a 10-year- old whisky. The golden amber dram has notes of cracked black pepper, fruits and milk chocolate, with a delicate smoky edge on the palate. The whisky has a long, deep finish with subtle smokiness and bonfire embers.

Keith Cruickshank, Benromach Distillery Manager, said: “By offering the opportunity to own and enjoy batch releases, we are able to further showcase the expertise of our distilling team while determining the right time to bottle each batch to take full advantage of the remarkable single malt whiskies we produce. We believe this expression will allow Benromach drinkers to understand more about the provenance of the whisky they are drinking.

“Every whisky we release has been carefully handcrafted by our close-knit team of distillers. While retaining the overall flavours that Benromach consumers have enjoyed in Benromach 100° Proof, the new Cask Strength Vintage release will differ subtly in both strength and flavour profile, reflecting the specific casks chosen from the vintage year.”

Benromach Cask Strength Vintage 2008 Batch 1 is presented in an elegant bottle with shapes and textures inspired by the Speyside distillery. The copper cut medallion on the packaging signifies the moment in time when the distillers cut to the sweet heart of the spirit run. Each bottle will detail the vintage year, batch number and age.

Benromach Cask Strength Vintage 2008 Batch 1 will be available in selected markets worldwide with a recommended retail price (RRP) of €69.95 (£59.95). Prices in local markets may vary depending on local taxes and duty.*

At Malt Marketing we pride ourselves in helping both aspiring and established whisky businesses market and promote themselves on our bespoke online whisky marketing platform Malt Marketing.com

Since launching in 2012, Malt Marketing has supported a large number of whisky shops, online retailers, whisky bars and events across the modern whisky drinking world. Through online banner advertisements, a bespoke whisky business directory and through regular online features and infomercials, Malt Marketing has helped build brand awareness and consumer engagement for a large number of clients

Malt Marketing continues to work alongside and support many of the most iconic premium scotch whisky brands available today including The Macallan, Highland Park and Laphroaig malt whiskies as well as Japanese whiskies Yamazaki, Hakushu and Hibiki. While providing an interactive and up to date platform from which to showcase premium brands, Malt Marketing also actively engage with brand content through social media further building brand presence and consumer awareness among wider social media networks.

With an in depth knowledge of the retail and secondary whisky market, Malt Marketing is well positioned to help you acquire rare and collectible whisky. Whether you’re a private collector or investor or merely taking your first steps into the world of whisky buying and selling, Malt Marketing can offer support along every step of the journey.

Sell Your Whisky With Malt Marketing

Get In Touch Today

For further details on how Malt Marketing can offer your business support with online marketing and promotion, contact: info@maltmarketing.com

This June, the biggest names in whisky will converge in Central London for The Whisky World Whisky Event. Now in its second year, the evening provides a chance to enjoy the best that the industry has to offer in a luxurious, upmarket setting.

This year’s event promises to be bigger and better than the first, with 55 leading and boutique distilleries converging on the Grosvenor House Hotel in Mayfair. The line-up includes several exciting debutants; distillers from as far afield as India, Taiwan and Israel will all be present for the first time, while Glenfarclas joins a prestigious roster of superstar scotches. The widely-applauded Nikka will also be on hand to demonstrate what’s gotten the industry so excited about the new wave of Japanese whiskies.

All in all, more than 250 bottles have been painstakingly assembled – meaning a dram to appeal to every palate, whether you’re a veteran in search of brave new expressions, or a neophyte who can’t tell a Speyside from an Islay. Eagle-eyed Scotch-lovers will note the fortuitous timing of this year’s event – which falls just after Ardbeg Day. As such, the Caribbean-influenced Ardbeg Drum will be on show; it’s the distillery’s first rum-finished expression, and sure to attract considerable interest.

The evening isn’t just for whisky purists, however! Peureux will be hosting a cocktail bar, where they’ll be showcasing a range of alcoholic fruit garnishes alongside the unique Golden Eight Pear Liqueur.

A particular highlight of the evening will be the official launch of several exclusive whiskies, each carefully selected and bottled for The Whisky World’s Whisky Event. They’ll be served alongside home-style delicacies from specialist kosher chef, Ezri, whose menu comprises Asian, French, Mediterranean and Middle-Eastern style dishes, each crafted to complement the whiskies being showcased.

And of course, alongside the food and drink, there’s the know-how to go with it: a hand-picked panel of world-class experts will lead a series of masterclasses, giving visitors the chance to sample the world’s most sought-after drams alongside some of the industry’s leading lights.

Abe Lubelsky, an organiser of The Whisky World Whisky Event, said: “Whisky is enjoying something of a global renaissance, with interest soaring. We’ve seen a growth not only in demand but also in awareness of the different distilleries, flavour profiles and production techniques. And drinkers are always eager to learn more! The Whisky Event provides an opportunity to do exactly that: there will be a huge range of whiskies to try, and ambassadors from the biggest brands on hand to lend their expertise. This luxurious evening will surely prove one of the highlights of the whisky-drinking calendar!”

The Whisky Event by The Whisky World takes place 02 June 2019 at the exclusive Grosvenor House Hotel, Park Lane, London. Tickets are priced at £100 per person, with a 15% early bird discount until the end of March.

To find out more, or to register, visit: http://www.thewhiskyevent.com

Now in its second year, The Whisky Event is a celebration of whisky, held in London and organised by The Whisky World. The Whisky World is an upmarket online shopping experience that includes all popular whisky brands and liqueurs as well as premium spirits. The website features outstanding search facilities and a huge selection of special offers and discounts to its customers.

The Macallan – Make The Call Video

The Macallan –
Would You Risk Falling For The Chance To Fly?

We’ve always believed at Malt Marketing that a picture tells a thousand words and well video yet more words still. When it comes to providing an insight into the world of the premium single malt, The Macallan never fail to disappoint as they continue to combine effective collaboration and a seemingly endless array of flair and creativity.

Highland Park 25 year old, distributed by Maxxium UK, was awarded the first ever 100-point score, along with the Chairman’s Trophy for Best of Category, by judges at Ultimate Beverage Challenge’s fourth annual Ultimate Spirits Challenge held March 11-15, 2013, in New York. 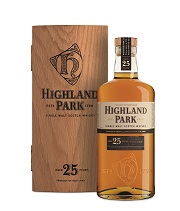 Gerry Tosh, Global Marketing Manager for Highland Park, said:  “To be the only ever recipient of the 100-point score in the history of the Ultimate Spirit Challenge is a great honour for Highland Park 25 year old.  We’re thrilled that the judges, all respected commentators in our industry, have selected Highland Park for this accolade in the presence of a strong array of competitors.  The fact that Highland Park was also represented so strongly across the board is very significant and allows us to maintain our award winning reputation.”

More than 70 companies from 30 countries around the world entered the Ultimate Spirits Challenge. The judging panels, which included many of the world’s most famous distilled spirits authorities, authors, and buyers, rated the distillates on a 100-point scale. The judges named 33 Ultimate Spirits Challenge Chairman’s Trophy winners and 151 finalists.

Highland Park 25 Year Old 2013 has an ABV of 45.7% and is available at selected whisky retailers at RRP £201.08.
For more information on Highland Park, visit www.highlandpark.co.uk

About Highland Park
Established in 1798 on Orkney, Highland Park is one of the most remote Scotch whisky distilleries in the world. For over 200 years, the distillery has combined time old tradition and the very best craftsmanship to achieve perfection. Its range of 12, 15, 18, 21, 25, 30 and 40 year old single malts is consistently acclaimed by connoisseurs and experts.  Highland Park has won a string of prestigious awards across its portfolio, most recently including category winner at the 2011 World Whisky Awards for its 25-year-old single malt and ‘Best Whisky in the World 2009’ for its 21-year-old expression in the World Whisky Awards, as well as four double gold awards in the San Francisco World Spirits Competition 2009.