Protecting Scotch In The Age Of Brexit

The UK is preparing for a time of great change as we approach Brexit. Leaving the European Union will undoubtedly have a major impact on British industries and exporters, including Scotch Whisky.

We have a team of specialists at the Scotch Whisky Association working hard to ensure the industry is ready for Brexit and that our voice is being heard. One area of great importance is looking at what Brexit might mean for the legal protection of Scotch Whisky, including its geographical indication (GI) status.

Our Director of Legal Affairs, Alan Park, considers how Brexit might affect the legal protection of Scotch Whisky.

Scotch Whisky has been defined in UK law since 1933. Brexit is not going to change that. Scotch Whisky is also recognised as a GI and has been since the concept was introduced by World Trade Organisation (WTO) rules in 1994.

A GI has unique characteristics and a reputation associated with its origin. Brexit will not alter the fact that Scotch Whisky is a GI. There is an obligation on members of the WTO, the vast majority of nations, to protect GIs from misuse. Some WTO members do that by providing a register for GIs in the same way countries provide a trade mark register. Scotch Whisky is recognised as a GI in this way from the Dominican Republic to Thailand.

Other countries choose to protect GIs in other ways and the SWA has taken advantage of those different approaches.For example, Scotch Whisky is specifically protected in the domestic legislation of many markets, such as the recognition given to Scotch Whisky in the US Federal Code. Brexit is not going to affect that either.

Where Brexit will have an impact is in the protection given to Scotch Whisky in some bilateral agreements between the EU and third countries. We want the UK to negotiate the continued benefits of those agreements but, in the meantime, the SWA is already taking steps to ensure that Scotch Whisky is recognised and protected in those markets in the range of ways available to it.

The key fact to remember is that the SWA has been protecting Scotch Whisky around the world before GIs were defined by the WTO in 1994, and before the EU existed, so whatever changes Brexit brings, the SWA will continue to do what it has done for many decades: stop the sale of any products unfairly taking advantage of the reputation of Scotch Whisky.

This means the consumer can continue to enjoy Scotch Whisky knowing that it is a well protected and high quality drink.

Scotch Whisky is an iconic product recognised around the globe and new research published today (28 January) reveals its vast contribution to economic growth in Scotland and across the UK.

‘The Economic Impact of Scotch Whisky Production in the UK’ report, commissioned by the Scotch Whisky Association (SWA) from 4-consulting, shows the industry contributes nearly £5 billion overall to the UK economy. For every £1 million of value added, the industry generates another £520,000 across the UK, for example in spending on suppliers in a range of sectors, from packaging to haulage.

In terms of the value it adds to the UK economy, Scotch Whisky is bigger than a number of industries, such as iron and steel, textiles, shipbuilding and computing. It is also larger than other UK food and drink sectors, including meat, dairy, beer and soft drinks. In Scotland, it makes up almost three quarters of the food and drink sector and is three times the size of Scotland’s digital or life sciences industries.

Key findings of the report include:
•Overall economic contribution of Scotch Whisky industry to UK is almost £5bn (£4.956bn).
•Direct economic impact of industry, ignoring its wider economic benefits, is £3.3bn, up 21% since 2008.
•Each year, Scotch Whisky producers spend £1.8bn on suppliers. 90% of that expenditure is in the UK, including £1.4bn in Scotland. Dry goods, including bottles and packaging, cereals, energy and transport and distribution make up the majority of purchases.
•Capital expenditure makes up £140m of the total industry spend. Some 70% of that is outside Scotland in other parts of the UK and overseas. The specialist nature of capital equipment, such as machinery, vehicles and software, means it often has to be sourced from further afield, spreading the impact of the Scotch Whisky industry across a wide geographical area.
•The industry supports 40,300 jobs in the UK – up from around 35,000 in 2008 – in a range of sectors including glass manufacturing and labelling. This total includes 10,900 people directly employed by the industry in Scotland, up 6%.
•Every job in Scotch Whisky supports a further 2.7 British jobs.
•Scotch Whisky workers are among the most productive in Scotland – they are around four times as efficient in production as employees in aerospace, life sciences and the digital sectors. 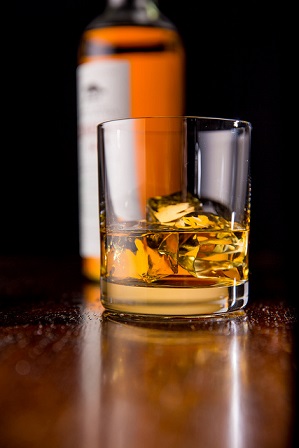 As well as supporting employment in towns and cities, for example in large bottling halls, Scotch Whisky is the lifeblood of many rural communities where it sustains 7,400 jobs, contributes around £900m in gross value added (GVA) and generates around £250m of income.

Despite a slowdown in exports, the Scotch Whisky industry is expanding at unprecedented levels with around 30 new distilleries being planned or built across Scotland. Capital investment reached £142m in 2013, up 31% since 2008.

Finally, Scotch exports are vital to the UK’s balance of trade. They are worth around £4bn a year and without them the UK’s trade deficit would have been 16% larger in 2013.

Scotch Whisky must be recognised as a cultural asset that boosts growth and jobs, supports communities and combines the best of the traditional and the modern.

“Given the scale and impact of the Scotch Whisky industry we believe the government should show its support. One way of doing so, in the short term, would be for the Chancellor to cut excise duty by 2% in the March Budget. It is unfair on the industry and consumers, and detrimental to the economy, that almost 80% of the average price of a bottle of Scotch is taxation.”

A full copy of the report is available here /media/70534/economic_impact_20pp_web_v2.pdf

The report
Gross Value Added (GVA) measures the contribution to the economy of each individual producer, industry or sector in the United Kingdom.

Gross Domestic Product (GDP) is a key indicator of the state of the whole economy. In the UK, three theoretical approaches are used to estimate GDP: ‘production’, ‘income’ and ‘expenditure’.

To find out more about the ‘Drop the Duty!’ campaign to have excise cut by 2% visit  www.droptheduty.co.uk and follow it on Twitter @droptheduty