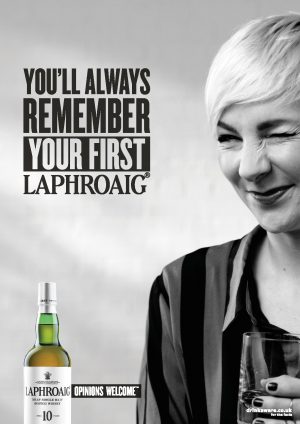 2nd November 2020: Laphroaig, the UK’s number one peated single malt*, has announced the launch of a new fully integrated above the line campaign. It is aimed at capturing the unique reactions of consumers attempting to describe the smoky flavour of this iconic Islay single malt.

Basking in the divisive, yet unforgettable, taste of Laphroaig, the campaign will appear across broadcast TVC (30”) with social and digital media (15”) going live from 1 December.

‘You’ll always remember your First Laphroaig’ is the next chapter of Laphroaig’s Opinions Welcome advertising campaign and the idea that everyone has their own, often unexpected but always unique reaction to this whisky. The new creative plays on this concept via the coming together of first time Laphroaig drinkers.

Filming genuine members of the public across a variety of ages and backgrounds, each individual is handed a bottle and glass and invited to enjoy their first sip. Beginning with trying to pronounce the name of the infamous liquid, what ensues is a variety of facial expressions that range from hesitant and unsure, to full-blown dislike, pleasant surprise and deep love for the taste – each perfectly capturing the experience without the need for words. The film concludes with two of the brand’s newest and biggest fans fervently nodding and proclaiming their newfound love for Laphroaig. 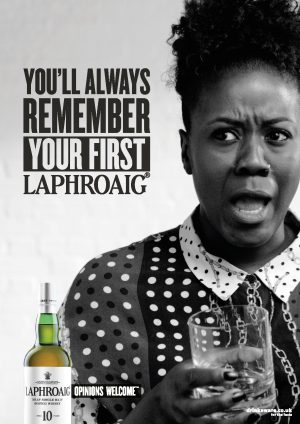 Perfectly articulating Laphroaig’s personality in a way that transcends traditional whisky advertising, the playful yet honest persona positions the experience of drinking a Laphroaig as a memorable one, no matter the outcome.

Nick Ganich, Head of Brands, Edrington-Beam Suntory UK said, “The idea that Laphroaig isn’t for everyone is what makes it such an iconic and inclusive brand. You may love or indeed dislike the taste, but what is certain is that drinking Laphroaig is a deeply personal experience that elicits great emotion and often debate amongst our customers and consumers.”

Jim Robinson, Managing Director, Warp & Woof said: “Bringing this core part of the brand’s personality to life through the campaign has been a lot of fun and something we believe will encourage thousands of soon to be die-hard fans to discover Laphroaig.”

The campaign will also feature as part of Video on Demand through Sky Go, ITV and All 4 and in a variety of formats across both Instagram and Facebook.  Furthermore, it will stretch across UK retail and e-commerce outlets featuring Laphroaig’s “Opinions Welcome” gift packs in the lead up to the key Christmas period. 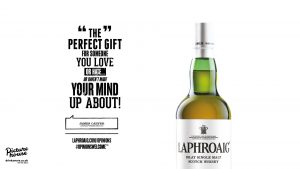 UK, 28 November 2016: Tis the season for giving and sharing…opinions. Get into the spirit
with a limited edition Laphroaig® festive jumper. Whether it’s a gift for a loved one or a treat
for you, this fun jumper is the ideal way to spark conversation around the dinner table this
holiday season. Available from the Laphroaig® online shop, wear it with pride and express
your opinion on this divisive single malt, however wild or wonderful.
A SPECIAL SEASONAL RELEASE
Last year’s Laphroaig® festive jumpers sold out in just 24 hours and with
only 1,000 limited edition jumpers available this winter, get your hands on
one now before its too late! 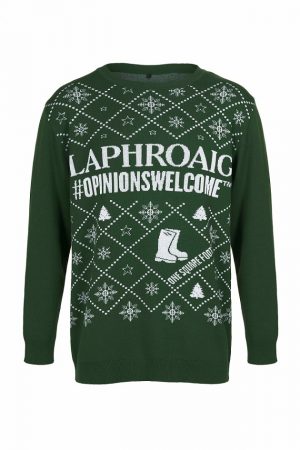 Embroidered with a seasonal Fair Isle pattern and the Laphroaig®
#OpinionsWelcome™ slogan, this festive jumper is ideal for whisky
enthusiasts who have an opinion and are not afraid to wear it.
LOVE IT OR HATE IT
Whether you love the medicinal flavours of Laphroaig® or hate its smoky
scent, it cannot be denied that Laphroaig® divides opinion.
#OpinionsWelcome™ celebrates the hugely varied descriptions of
Laphroaig® and this unique festive jumper champions them, urging lovers
(and haters) to profess their feelings for the whisky this winter.
The unisex Laphroaig® festive jumper is available in size S, M, L and XL.
To get yours now, visit www.laphroaig.com/shop. 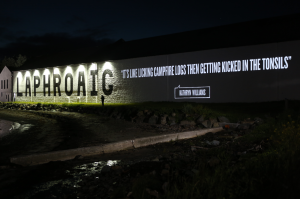 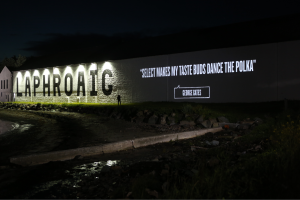