Maker’s Mark has launched its new Grow Your Own Garnish bottle, including mint seeds so you can get growing at home.

The iconic bourbon is now available to purchase for a limited time with a paper envelope tied round the neck of the bottle containing mint seeds, so you can grow your own mint garnish and create the classic Maker’s Mark signature serve – the Mint Julep. Printed on the envelope itself is the Mint Julep recipe, which brings together all of the key ingredients to create a refreshing cocktail at home.

The Maker’s Mark ‘Growing for Good’ mission statement highlights the importance of sustainability within the production of the whisky itself. The distillery is the only one in Kentucky that owns and controls the water source for its whisky, which reflects its commitment to improving plant diversity and providing wildlife habitat. Launching the new Grow Your Own Garnish Kits builds on Maker’s Mark’s passion for conservation and looking after the environment.

Bottles are available to purchase now in-store at Tesco, Waitrose, Sainsbury’s, Asda, and Morrisons for the price of £32.

The much anticipated Maker’s Mark variant is targeted at premium on trade and luxury retail outlets and will be available from September following a preview in Harrods from 24th August.

Maker’s 46 is created by removing fully matured Maker’s Mark bourbon from its barrel, affixing ten seared French oak staves to the inside of the original barrel, then putting the Maker’s Mark back in and aging it several more months. This second maturation is carried out in the coolest part of the warehouse, resulting in a complex and delicious flavour profile of caramel, vanilla and spice. This rich liquid is bigger and bolder but with the drinkability that is synonymous with Maker’s Mark. The number 46 refers to the 46th recipe Bill Samuel’s Sr created before finally identifying the sought after unique stave profile used to deliver its distinctive taste.

Created to be sipped neat or over ice, Maker’s 46 has been carefully crafted using the traditional Maker’s Mark ingredients, including red winter wheat for its gentle, smooth taste.

The elongated 700ml bottle is premium and elegant, with the Maker’s 46 logo etched on the glass. The iconic Maker’s Mark hand-dipped red wax finishes the look.

The launch is being supported by an interactive bartender event at Dandelyan on 24th August and consumer activity in Harrods from 26th August, including tutored tastings and a caricaturist who will create bespoke gifts.

Maxxium UK’s Marketing Controller for Imported Whiskey, Janice McIntosh, says: “Maker’s 46 is uniquely crafted to deliver an exceptional flavour that is bigger and bolder while maintaining the smoothness of Maker’s Mark. Bartenders and bourbon aficionados will be keen to welcome this premium expression as it meets the growing appetite for quality bourbons and we couldn’t be more excited to introduce it to the UK” 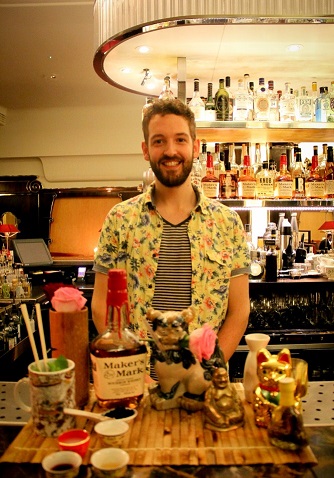