Laphroaig® Unveils the Second Instalment In The Ian Hunter Series

Following the huge success and popularity of Ian Hunter Book One, Beam Suntory’s Laphroaig has announced the second instalment in the fascinating Ian Hunter Story™ that continues to honour the legacy of the icon and last founding member of the Johnston family to run the Laphroaig® Distillery. 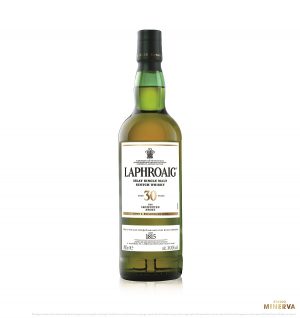 The Ian Hunter Story™ will consist of five annual releases, the first of which was launched in 2019, set into beautifully crafted books that document the story of Ian’s incredibly rich legacy. Every year a new chapter is unveiled, uncovering the extensive history behind Laphroaig® and the characters who created it.

Following on from Book One: ‘Unique Character’, Book Two is entitled ‘Building an Icon’ and is limited to just four hundred cases, meaning this incredibly rare liquid will be a highly sought after collectable from whisky enthusiasts all over the world.

This collection is unlike any other and one that is sure to be treasured by Laphroaig® passionate fans across the world.

With Book One reflecting on Ian Hunter’s formidable character, Book Two is dedicated to the hours of tireless work Ian Hunter committed to the Laphroaig® brand whilst at the helm. Matured in Sherry casks for 30 years, this non-chill filtered whisky is beautifully rounded with a combination of sweet, spiced and medicinal notes. Ian’s innovative approach to whisky-making is especially notable here, resulting in Laphroaig®’s iconic signature flavour: complex, smokey and often polarizing.

For whisky lovers who have always wondered who built the undeniably iconic Laphroaig® distillery on a craggy shore on the Isle of Islay, the latest chapter of the Ian Hunter Story™ answers that very question. Who else but Ian Hunter? The second book of Ian’s story is dedicated to his tireless work building Laphroaig®’s distillery and infrastructure, and therefore, Laphroaig®’s icon.

The latest instalment delves deeper into Ian’s innovation in the very fabric of the distillery. Having introduced American oak, ex-Bourbon barrels to the maturation process, Ian realised the distillery itself would have to expand to keep pace with the changes he was to make. Although he may not have realised it at the time, Ian’s expansion of the Laphroaig® distillery would one day become a worldwide icon.

Ian’s tireless work on building the Laphroaig®’s iconic infrastructure ensured that the exquisite and distinctive whisky, that matures gently inside the warehouse while drawing on the flavour of the wood and breathing in the stormy Atlantic climate over 30 years, reaches its friends the world over.

At times polarising but highly regarded and loved by those who knew him best, Ian Hunter is one of the most important figures in the history of single malt whisky. His influence on Islay – one of the most famous whisky-producing regions – cannot be overstated.

Ian joined the distillery in 1908 as the youngest member of the Johnston family. His relatives, the brothers Donald and Alexander Johnston had founded the distillery in 1815. His arrival had a lasting legacy on the distillery that is still used to this day as he is credited with doubling the production and successfully exporting Laphroaig® whisky around the world.

One of his biggest successes was managing to sell Laphroaig® to America during Prohibition. Ian managed to do this by leveraging the spirit’s unique character, which meant that it could be sold for medicinal purposes. 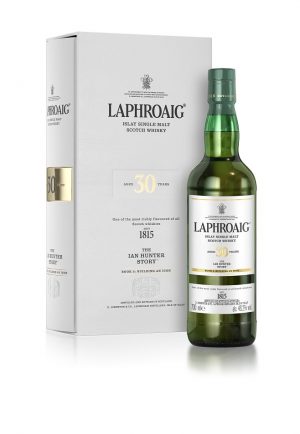 John Campbell, Laphroaig® distillery manager, comments: “You cannot enjoy Laphroaig®’s exquisitely smokey and complex liquid, without paying homage to the legendary Ian Hunter. His influence in our whisky production techniques and our iconic brand as a whole is undeniable. The second book in our Ian Hunter Story™ celebrates his legacy in shaping Laphroaig® to what it is today.”

The limited edition whisky will be available from selected retailers for an RRP of £760.