An exceptionally rare wartime cask from 1943 has been unveiled as one of the oldest and most exclusive single malt whiskies in the world.

The Elgin-based malt whisky specialists today (2nd October 2017) announced the release of Private Collection Glenlivet 1943 by Gordon & MacPhail , the latest offering in its ‘ Private Collection’ range. Only forty decanters will be available for sale globally, with a UK RRP of £30,000. 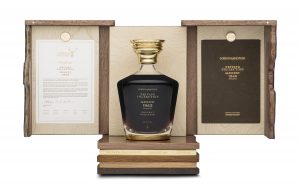 A small number of decanters will be available from Gordon & MacPhail’s historic retail shop in Elgin. Those purchasing a decanter at the South Street ‘spiritual home’ will also enjoy an exclusive tasting experience included in their purchase. Distilled on 14 January 1943, a crucial date in the history of World War Two, the new-make spirit was filled into a carefully selected Sherry hogshead at the renowned Speyside distillery. The release of Cask 121 also represents the last 1943 vintage from the Gordon & MacPhail stock inventory.

As the bung was being hammered into place in Cask 121, a world away in North Africa, Prime Minister Winston Churchill met President Franklin D. Roosevelt, General Charles de Gaulle, and General Dwight D. Eisenhower at the Casablanca Conference. The meeting discussed Allied strategy for the war in Europe. Historians came to view this meeting as critically important to the fate of the world for generations to come.

By the winter of 1943, the war had severely curtailed production of whisky in Scotland. Prices and duty were on the rise and rationing meant raw ingredients were in increasingly short supply. In fact, many Scottish distilleries were closed after October 1942; The Glenlivet Distillery itself halted production in the Spring of 1943. Mature whiskies from this period were in great demand so, by the late 1940s and early 1950s, available casks were extremely limited.

Rich chestnut brown in colour, Private Collection Glenlivet 1943 by Gordon & MacPhail is a whisky of great balance and approachability. A full, fresh flavour of dark chocolate, oranges, and oakiness intermingles with treacle and liquorice and culminates with a subtle, ashy smokiness and an incredibly long finish.

Founded in 1895 in Elgin, Scotland, Gordon & MacPhail is the custodian of many of the oldest and rarest single malts in the world with an unrivalled stock inventory. The fourth generation of the Urquhart family uphold the same traditions and dedication to whisky maturation as the generations that came before them.

In 1943, Cask 121 was selected by John and George Urquhart, first and second generation of the Urquhart family, for filling at the Glenlivet Distillery. Stephen Rankin, a director of the company and John Urquhart’s great-grandson, made the decision to bottle it.

Stephen Rankin said: “This beautiful whisky has been nurtured and cared for by four generations of our family and it gives us enormous pleasure to release this unique and incredibly rare single malt. 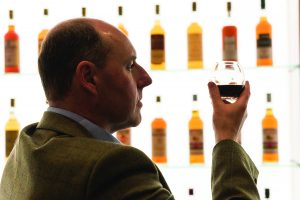 “Gordon & MacPhail has been in the whisky business for over 122 years, with each generation building and handing on a lifetime’s expertise to the next. We believe Private Collection Glenlivet 1943 by Gordon & MacPhail is a malt without comparison from a defining date in the history of a world in conflict.

“Today, whisky is a wonderfully unifying drink and this rare example gives people from across the world the chance to own and savour a defining piece of Scotland’s liquid history.”

Whisky writer and rare whisky specialist Jonny McCormick said: “Gordon & MacPhail is a singular whisky company emphasised by their incomparable capacity to draw on stocks from the 1940s. This is an unparalleled opportunity to acquire an exquisite whisky that embodies the concept of rarity. The remarkable complexity and vivid flavours that have developed over a lifetime in wood ensure this single malt Scotch whisky will make a handsome addition to the world’s finest whisky collections.”

Every detail of Private Collection Glenlivet 1943 by Gordon & MacPhail alludes to the decades of experience and patience poured into nurturing the whisky to maturation.

The meandering River Spey provides a unique closure to the handcrafted wooden box. Hand blown and bespoke, the decanter itself is adorned with gold engravings of the contours of the land surrounding the Glenlivet Distillery.

Accompanied by a visually atmospheric commemorative book, written by whisky author Jonny McCormick, each decanter is individually numbered with a certificate of authenticity signed by Stephen Rankin, director and member of the Urquhart family. 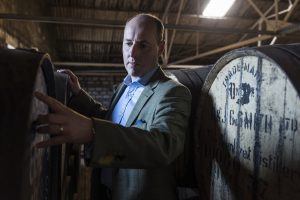 Private Collection Glenlivet 1943 by Gordon & MacPhail was matured in a first-fill Sherry hogshead for seventy years. Only forty decanters, bottled at cask strength (49.1 ABV), have been released for sale worldwide. A limited number are available for purchase directly from the company’s ‘spiritual home’, the South Street Retail Shop, at an RRP of £30,000. Prices may differ in international markets due to local taxes and duty.