Highland Park, distributed by Maxxium UK, has announced the release of a special edition single malt Scotch whisky. FIRE Edition is a whisky which has been matured exclusively in refill Port wine seasoned casks and follows on from the release of ICE Edition earlier this year.  This completes the two-part series of special edition bottlings which celebrate the myths and legends emerging from the Viking age.

Jason R. Craig, Brand Director, commented: “Maturing our distinctive whisky in 100% refill Port wine seasoned casks is a first for Highland Park and the result is a vibrant 15 year old single malt with an ABV of 45.2%. FIRE Edition has a natural slight reddish hue, intense aromas of ruby red fruits, light smoke and a long, lingering finish. However, it is still, unmistakably, Highland Park.” 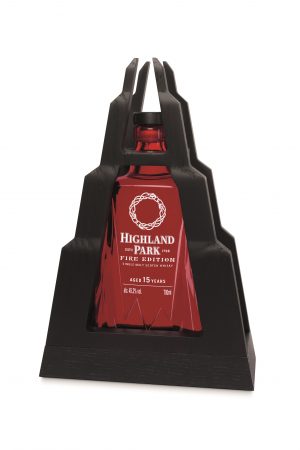 The exquisite crimson red coloured glass was specially commissioned to represent the fierce and molten world of the Fire Giants from Viking mythology. The bottle is encased in a distinctive black wooden cradle with accompanying black wooden stopper. A booklet which accompanies the bottle, recounts the story of the realm of the Fire Giants and their epic battle against the Gods to rule the world.

According to Viking legends, Surtr was an evil Fire Giant who ruled the Fire Realm. He would sit at the edge of the kingdom, defending the land holding a burning sword, which shone brighter and hotter than the sun.  The culmination of these tales is an apocalyptic battle between the Gods and the Giants. Surtr led the sons of Muspell across the bridge of Bifröst, burning everything in sight at Asgard, (realm of Gods; Thor, Loki, Freya and Odin) destroying the world at Ragnarök, heralded as ‘The doom of the Gods.’ The world perished in a blazing and burnishing ball of flames and from the ashes, a new earth was recreated.

FIRE Edition, a special release of 28,000 bottles globally, is now available from UK specialist whisky retailers including The Whisky Exchange, Hedonism and The Whisky Shop at an RRP of £190.

Distributed by The Big Partnership on behalf of Maxxium UK.

Laura Hutchinson or Gabrielle Roscamp at The BIG Partnership