The Campbeltown Malts Festival, which this year ran from 22-24 May, celebrates all that is unique and special about single malts from the region. In the Victorian era the town was home to more than 30 distilleries and known as ‘whisky capital of the world’.

Making its debut as part of this year’s event was the Glen Scotia 2000 Single Cask Festival bottling. Selected by a panel which included whisky expert Charles MacLean, just 147 bottles of this beautifully balanced 18 Year Old, which combines maritime notes with a buttery vanilla sponge base, have been made available and they can only be purchased directly from the distillery, priced at £150. 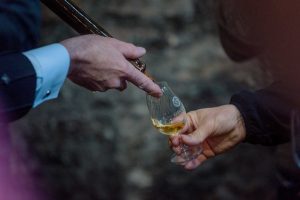 The sold-out event, which paired local produce with a selection of Glen Scotia drams, was held at the Ardshiel Hotel. The hotel’s bar is renowned internationally for its extensive collection of single malts.

Finally, making its first international outing at the festival was the Glen Scotia Campbeltown Malts Festival 2018 Limited Edition Ruby Port Finish, priced at £45. Distilled in 2008 and matured in first fill bourbon barrels before being finished in Ruby Port casks for six months, the non-chill filtered liquid was then bottled at cask strength – 57.8% ABV.

Peated and smooth, this limited edition 10 Year Old Single Malt is sweetened by red fruits before delivering a long finish tinged with a dry saltiness. Only 6,000 bottles have been made available worldwide, with orders already in from markets including Germany, Switzerland and Taiwan.

Iain McAlister, Distillery Manager at Glen Scotia, said: “We enjoyed welcoming visitors old and new to Glen Scotia as part of this year’s Campbeltown Malts Festival. It was a fantastic opportunity for them to discover our award-winning Glen Scotia single malts and the distinctive character associated with Campbeltown, which is the smallest of Scotland’s five Scotch producing regions.

“This year’s festival was extra special as it followed our recent double golds at the San Francisco World Spirits Competition 2018. We’ve long championed craftsmanship at Glen Scotia, and our time honoured traditions are now being recognised as more and more people seek to engage with craft drinks and discover new brands.”

On Wednesday 23 and Thursday 24 May the distillery hosted dunnage tastings as well as free distillery tours. Cooperage demonstrations and tastings were also available, while local stalls offered a variety of craft items and produce.

Demand for Glen Scotia’s distinctive single malts has soared following the launch of a new Global Travel Retail range and the introduction of the ‘Glen Scotia Grand Tour’, an experiential event designed to offer whisky lovers the chance to experience the essence of Campbeltown.

Held in London’s Borough Market from 15 – 17 March, the Glen Scotia Grand Tour aimed to transport whisky lovers to the Glen Scotia distillery on the Mull of Kintyre and replicate the experience of visiting the distinctive Campbeltown Whisky region. It is set to be rolled out to the US later this year.