23 April 2015: Maxxium UK is welcoming Beam Suntory’s super-premium collection of small batch bourbons featuring Basil Hayden’s, Booker’s and Baker’s this month. Available across the on-trade, the trio are among the highest quality products from the world’s #1 bourbon producer, offering consumers premium expressions of bourbon that showcase the long-standing traditions of the Beam family.

Jim Beam’s strong family heritage is at the heart of the development of all three small batch bourbons. Baker’s is named after Baker Beam, Jim Beam’s great-nephew; Booker’s was created by Jim Beam’s grandson, 6th Generation Master Distiller Booker Noe; and the recipe for Basil Hayden’s Bourbon dates back to 1796.  The result is a collection of distinct and exquisite bourbons, rich with American heritage. These bourbons are individually unique and now for the first time have a unified bottle shape ensuring the collection is easily identifiable on shelf and in bar. 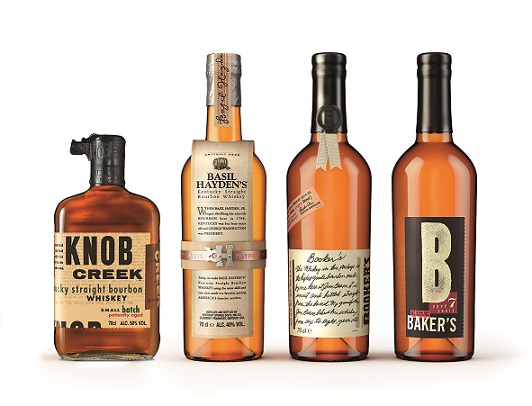 Baker’s Bourbon is aged for seven years and hand bottled at 53.5% ABV. The Beam family has a secret jug yeast recipe that has been used for over six generations and it is this formula which is responsible for the bourbon’s silky smooth texture and for balancing the bold, intense flavour with a consistently luxurious taste from batch to batch.

Master Distiller Booker Noe, Jim Beam’s grandson, originally created Booker’s for his own personal use. It is one of the only bourbons available today that is bottled straight from the barrel, uncut and unfiltered, yielding an intense flavour and nose which is one of a kind. Booker’s Bourbon is bottled at its natural ABV of 62.5%  and aged for between six and eight years in barrels in the centre of the rack house. The temperature and humidity there ensure the perfect conditions for ageing this exceptional bourbon. Each of the barrels used in this process were hand-selected by Booker himself, leaving a lasting legacy.

Basil Hayden’s was created with the same high-rye style of the whiskey originally produced by its namesake in 1796. Basil Hayden the distiller was born in Maryland, where a high proportion of rye was used in the production of whiskey and then moved to Kentucky, adapting the method of producing whiskey from a base of corn. However he continued to add a higher percentage of rye than other distillers, resulting in a smooth, mild bourbon, with a slightly peppery taste and aroma. This bourbon has a gentle taste and at 40% ABV it is smooth and approachable.

The small batch bourbons will be available in the UK on-trade from the 1st May.

“The premium bourbon segment is a developing opportunity within the category and we are proud to offer customers and consumers the premium Baker’s, Booker’s and Basil Hayden’s bourbons. This unique collection will allow our customers to capitalise on the growth of US whiskey and offer something special to the growing contingent of American whiskey enthusiasts.”