LONDON, UK – The House of Suntory, the founding house of Japanese Whisky, has announced the release of a specially-designed bottle of Hibiki Japanese Harmony. Designed to represent both celebration and shared happiness in honour of the 30th anniversary of the Suntory Whisky Hibiki brand, the limited edition bottle will be widely available in the UK at a suggested retail price of £100 (750ml) as of October 29, 2018. 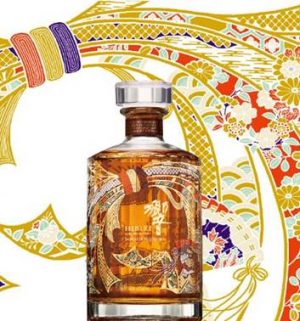 Inspired by a traditional kimono pattern, the bottle is embellished with the tabane-noshi, a traditional Japanese symbol of celebration that has often adorned precious gifts since ancient times. Several noshi are bundled together to make Hibiki Japanese Harmony’s tabane-noshi design, which is extremely auspicious and symbolizes shared happiness with others.

“Since the brand was first established, Hibiki has been a representation of Japanese art and design,” said Takahiro Itoga, Senior Global Brand Director at Beam Suntory. “This specially-designed bottle honours that spirit, utilising traditional Japanese symbols to create a design representing both celebration and shared happiness. The bottle in and of itself is a work of art, making it the perfect gift for Christmas.”

The Hibiki brand was introduced to the world in 1989 and since then has been embraced as the paragon of the Art of Japanese Whisky. It is not only one of Japan’s most highly awarded blended whiskies, but also among the most prestigious and honoured whiskies in the world. Introduced in 2015, Hibiki Japanese Harmony is a harmonious blend blessed with the riches of Japanese nature and craftsmanship. Inspired by the riches and subtleties of Japan’s 24 seasons of the traditional Japanese lunar calendar and mastered by Suntory’s Art of Blending, Hibiki Japanese Harmony is a meticulous blend of the finest selection of malt and grain whiskies from the House of Suntory Whisky’s Yamazaki, Hakushu and Chita distilleries. This delicate blend creates a oneness unfolding a full orchestra of flavours and aromas. 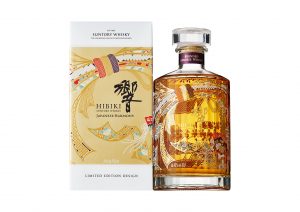 Available from Harrods, Selfridges, The Whisky Shop and The Whisky Exchange from 29.10.18

Suntory was established in 1899 and is headquartered in Tokyo, Japan. Since 1923, as the pioneer of Japanese whisky, Suntory Whisky has been renowned for its House of Master Blenders and for their Art of Blending. The founding father of Japanese whisky, Shinjiro Torii, built Japan’s first malt whisky distillery in Yamazaki. Nestled in the outskirts of Kyoto, this region was the birthplace of the traditional Japanese tea ceremony and is known for the purity of its waters. Torii dreamt of creating an authentically Japanese whisky by choosing a terrain and climate completely different to that of Scotland, thereby cultivating unique conditions for maturation.

In 1972, Torii’s son Keizo Saji, Suntory’s second master blender, built the Chita grain distillery near Nagoya to produce more of their own high-quality grain whiskies. In 1973, Saji founded the Hakushu distillery amidst the deep forests of Mt. Kaikomagatake in the Japanese Southern Alps with the goal of producing malt whiskies distinct from those made at Yamazaki. Its high altitude and lush environment are what differentiates Hakushu from other distilleries.

At each of these distilleries, a diverse array of whiskies are produced through various fermentation techniques, shapes and sizes of giant copper pot stills, and the wide variety of cask types used. Today, roughly 1,200,000 casks of whisky are quietly maturation in Suntory’s aging cellars. This tsukuriwake—variety in the making—allows for the blending opportunities that are essential to achieving the subtle, refined yet complex taste signature to Suntory Whiskies.

With respect to heritage and a commitment to innovation, third generation master Blender Shingo Torii, and grandson of Shinjiro, now leads this most highly awarded house of Japanese Whisky. The House of Suntory Whisky has been named four-time Distiller of the Year at the International Spirits Challenge in London, UK (2010, 2012, 2013, 2014).

Beam Suntory was created in 2014 by combining the world leader in bourbon and the pioneer in Japanese whisky to form a new company with a deep heritage, passion for quality, innovative spirit and commitment to Growing for Good. Headquartered in Chicago, Illinois, Beam Suntory is a subsidiary of Suntory Holdings Limited of Japan. For more information on Beam Suntory, its brands, and its commitment to social responsibility, please visit www.beamsuntory.com and www.drinksmart.com.