THE FAMOUS GROUSE ANNOUNCES WINNERS OF…

The Famous Grouse has released the winners of its ‘Famous Fridays’ headliner competition.

The competition which launched at the beginning of July by Scotland’s favourite whisky gave four talented artists or bands the chance to win a headline slot like no other and earn the right to say they have played on stage at The Famous Grouse House this Edinburgh Festival!

The winners; Edinburgh based electronic pop rock band DMS will be joined by psychedelic pop band The Mink Stoles, Livingston born Adriana Spina, who will perform her unique brand of alternative acoustic Americana – some of which has enjoyed immediate critical acclaim including being listed as “Single of the Week” on BBC Radio Scotland, as well as folky indie pop singer-songwriter Lou Mclean, who combines her exceptional voice with original acoustic guitar – providing an array of musical talent to the famous venue. 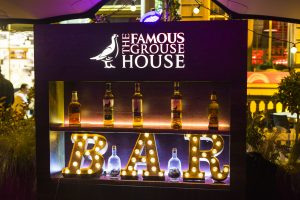 Scottish entertainer and Forth 1 radio presenter Grant Scott was joined by Edinburgh born musical director, writer and producer David Whitmey, who has worked with the likes of The Wanted, Mika and The Saturdays, to lend their ears and help The Famous Grouse team to help choose the lucky shortlist before the going through to the next stage – the public vote via The Famous Grouse Facebook page.

David Whitmey, who is currently working with Gary Barlow and Sony Records projects, said : “This was an amazing chance for unsigned bands and artists to win a prime slot to headline on one of the most coveted stages at the Edinburgh Festival this August. The quality of entries was exceptional and it was a tough call when it came to selecting the shortlist. The winners all have huge potential and we can’t wait to have them perform on the stage. They will be joined by some of Scotland’s best up and coming bands and breaking acts from all over the globe”

The winners will be joined by some of Scotland’s best music acts and musical fringe performances from all over the globe, as part of the eclectic festival programme at The New Town Theatre. Located just outside this popular festival venue, on a pedestrian friendly section of George Street, The Famous Grouse House will be open daily from 11:00am to midnight and include performances from the hugely popular Posable Action Figures, Glasgow based indie rock band Kelvin and the hugely admired solo artist Luke Carey taking to the stage. With critically acclaimed new music, a festival vibe and a fresh sense of fun, The Famous Grouse House is going to be the perfect place to soak up the best of the festival.

Johna Penman, Marketing Controller, The Famous Grouse commented: “Congratulations to our four winners! The Famous Grouse House made its name at the festival last year with a combination of great live music every day and a variety of refreshing summer serves. We can’t wait to welcome DMS, The Mink Stoles, Lou McLean and Adriana Spina to our famous venue – there’s no better place to be this August.”

The Famous Grouse House will be open daily from the 3rd to the 27th August, from 11am until midnight, with live music every day, situated outside New Town Theatre, 96 George Street.