17th June 2019 – Beam Suntory’s Laphroaig® has been awarded a total of five medals at the 2019 San Francisco World Spirits Competition, including a coveted Double Gold for its PX Cask Travel Retail Exclusive.

The awards, from one of the most significant global competitions, further cements Laphroaig’s famously divisive liquid as a true icon of the whisky world.

The top awarded expression was Laphroaig PX Cask Travel Retail Exclusive, which scooped the much-coveted Double Gold with its intense and rich flavour. Matured in three different types of cask – American oak, Quarter casks and finally Pedro Ximénez casks – the whisky is an explosion of peat with a heavy sherried oak dryness.

Gold medals were also awarded to Laphroaig’s 10-year-old, Select and Quarter Cask expressions, showing that the famed divisive whisky is still winning plaudits across the globe for its unique expressions.

Select is created from carefully selected casks of each of the distillery’s key styles. Mostly, these are historic styles, with one notable addition: the heart of the spirit is drawn from a final maturation in American oak casks – rarely used for scotch whisky. Bottled at natural colour, the result is an exquisite Laphroaig with the trademark ‘peat reek’ matched by an additional layer of complexity and depth brought about by the fusion of the maturation styles and different oaks.

Laphroaig 10-year-old is the original Laphroaig, distilled the same way today as when Ian Hunter invented it more than 75 years ago. Those enjoying the 10 Year Old will first notice the bold, smoky taste, followed by a hint of seaweed and a surprising sweetness. This full-bodied variant is the foundation of all Laphroaig expressions and comes with a long finish.

Laphroaig Quarter Cask offers an irresistible doubling of flavour due to the double maturation in two casks made of American oak. Still-maturing whisky from our standard ex-bourbon barrels is transferred to quarter casks and left to rest in our warehouse just a stone’s throw from the Atlantic shore. This process represents Laphroaig breathing new life into a once-defunct tradition: the use of the smaller cask size, which ensures increased contact with the oak, creating a soft and velvety edge to complement Laphroaig’s distinctive peatiness. 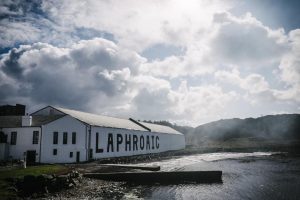 John Campbell, Laphroaig Distillery Manager, comments: “Our whisky has been dividing opinions since 1815 and we embrace every one of them – the good and the bad. But that doesn’t mean we’re not incredibly proud when our whisky picks up an award, even more so when five of our whiskies do.”

“The PX Cask Travel Retail Exclusive is an exceptional liquid that has only been in our range for a few years, so to have it award a Double Gold is a terrific achievement for the whole distillery team.”

Alongside the Double Gold award and three Gold medals, Laphroaig Lore also picked up a Silver medal to round off an impressive showing from one of Scotland’s most esteemed distilleries.