From the world’s No. 1 Bourbon Jim Beam Apple Makes a Splash on TV

Jim Beam Apple, the latest flavour innovation from the world’s No. 1 bourbon, will make its television debut this summer. The Jim Beam Apple advertisement, which airs nationwide until the end of July, features Jim Beam’s global partner Mila Kunis and introduces the new product and its refreshing, signature cocktail – the “Jim Beam Apple Splash.”

This is the largest burst of TV advertising Maxxium UK has executed this year, reaching over 52% of the UK population. The programme schedule includes TV shows such as Big Bang Theory, 8 out of 10 Cats Does Countdown, Breaking Bad and Iron Man, targeting 25-35 year old males. 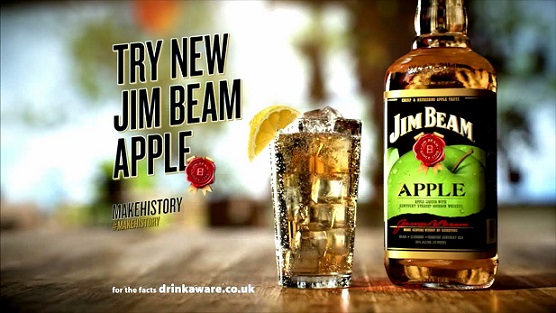 With a refreshing take on family tradition, Jim Beam distillers have brought together the taste of crisp, green apples and Kentucky Straight Bourbon Whiskey. The result is a perfect balance of apple and bourbon, rich with American heritage. The signature serve, “Jim Beam Apple Splash,” mixes Jim Beam Apple and tonic over ice with a wedge of lemon for a delicious, refreshing drink all year round.

The introduction of new flavours to the Jim Beam family has fuelled the growth of the brand in the UK, increasing at 53.5% volume MAT1.

Jim Beam Apple is available across the on- and off-trade including Morrisons, Asda and national on-trade wholesalers including LWC, Wallace’s Express, HT White, Venus, Molson Coors and Carlsberg.

Maxxium UK’s Marketing Controller for Imported Whiskey, Janice McIntosh says: “We are excited to see the world’s No. 1 bourbon, Jim Beam, back on TV with a focus on Jim Beam Apple and to share this new product with consumers at a time when bourbon is in high demand.

“Flavours remain an important segment of the category and we are proud to support the launch of Jim Beam Apple and communicate a refreshing signature serve that is a new and exciting way to enjoy Jim Beam. ‘Jim Beam Apple Splash’ is a refreshing serve perfect for the summer months encouraging our customers to capitalise on the growth of US whiskey and flavoured bourbon.”