One of Campbeltown’s three surviving distilleries, Glen Scotia, has added an exceptionally rare 45-year-old single malt to its award-winning range.

Encased in a stunning handcrafted walnut box, and limited to 150 bottles world-wide, Glen Scotia 45-year-old Single Malt Scotch Whisky is not only the oldest expression to be released by Glen Scotia distillery but also one of the most exclusive. A whisky truly made by history, Glen Scotia 45 year old reflects the centuries of craftsmanship and experience associated with Campbeltown. 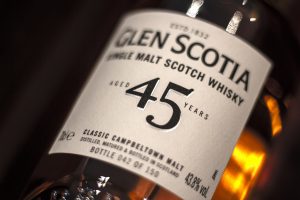 Embodying all the signature characteristics of a Campbeltown single malt, the liquid is dominated by maritime influences. On the nose, it presents bold coastal elements, as well as sweet notes of ripe pineapple, crisp green apple, rose and vanilla.

The liquid was distilled in December 1973 before being filled into refill Bourbon casks two days before Christmas. Over three decades later, in 2011, the precious spirit was carefully re-casked into first fill Bourbon then laid to mature under the watchful eye of master distiller Michael Henry before finally bottling in 2019.

He said: “Glen Scotia 45-year-old is one of the most magnificent expressions to be produced by our Campbeltown distillery and we are excited that after 45 years we are now able to unveil it to the world.

“Distilled in 1973, this single malt is steeped in history and is extraordinarily rare. The liquid has been maturing in refill bourbon casks, tucked away in our bonded warehouses, for over three decades before being finished in first fill bourbon.

“It embodies all of the unique elements which Glen Scotia is known for, delivering a long mouth-watering finish with notes of sea salt and lime citrus. On the palate, the liquid presents caramel sweetness at first, then juicy fruit with pineapple, mango and water melon rounded by vanilla and honey.”

Paul Moran, director, Moran’s Wood Components, said: “It was an honour to create such a beautiful box for the Glen Scotia 45 year old, a very rare and historic whisky. Inspired by the intrinsic link between wood and whisky, we also drew from Glen Scotia’s vision of incorporating quality materials and craftsmanship, to reflect the same principles that go into the distillery’s award-winning single malts.

“We constantly strive to push the boundaries, and everyone at Moran’s is extremely proud of this project.”

Campbeltown is Scotland’s fifth and smallest malt producing region. Throughout the Victorian era it was known as the whisky capital of the world and home to more than 30 working distilleries.

To raise awareness of the importance of the region to Scotland’s whisky heritage, Glen Scotia distillery has been campaigning for Campbeltown to be recognised the “whiskiest place in the world.” In July 2019, a parliamentary motion on the issue lodged at Westminster received cross party support.

Iain McAlister, distillery manager, said: “It might be the smallest region, but the contribution Campbeltown has made to Scotch whisky is incomparable.

“For over 100 years, our coastal town has been crafting some of the world’s most exciting expressions and Glen Scotia 45 year old exemplifies everything you would expect of a fantastic Campbeltown single malt. It truly is the perfect addition to any collection.” 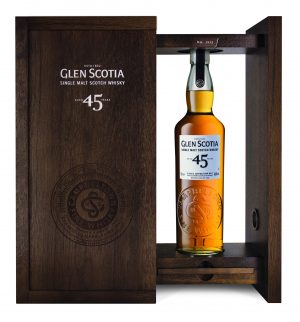 Glen Scotia 45 year old will be priced at £3,795 and available from specialist retailers from October, including the Whisky Shop.