EXPERIENCE THE DEPTHS OF THE BOWMORE NO. 1 VAULTS SCOTCH WHISKY THIS FATHER’S DAY WITH THE FIRST LIMITED EDITION RELEASE IN AN EXCLUSIVE FOUR PART SERIES

15 February 2017 – Bowmore® Islay Single Malt Whisky, home to the world’s oldest scotch maturation
warehouse, has announced the launch of Bowmore® Vault Edit1°n Atlantic Sea Salt, the debut release in a
four-part limited edition collection of whiskies. From now until the end of 2019 a new whisky will be released
every year, each of which will unlock one of Bowmore®’s four key flavours; Atlantic sea salt, peat smoke,
vanilla sweetness and citrus fruits. Crafted in the unique conditions of Bowmore®’s maturation warehouse
the No.1 Vaults, Bowmore® Vault Edit1°n Atlantic Sea Salt is the ideal gift for whisky lovers with a savoury
palate. 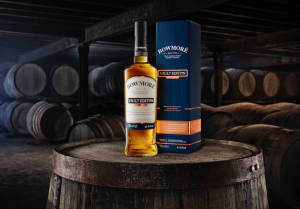 AN UNRIVALLED SERIES
Bowmore®’s unparalleled range of award-winning single malts is renowned for four key flavour characteristics
found in every bottle. From the salty sea spray of the Atlantic Ocean that pounds the distillery’s ancient coastal
wall, to the gentle peat smoke synonymous with this famous Islay malt, Bowmore® will proudly showcase its
distinctive qualities with the launch of the Vault Edit1°n series.
UNLOCK HIDDEN DEPTHS
The Vault Edit1°n series takes its name from Bowmore®’s
legendary No.1 Vaults, which was established in 1779. It has been
said that time stands still in the chilling sea-air atmosphere of the
No.1 Vaults and transforms single malt whisky into liquid gold to
create Bowmore®’s perfectly balanced expressions and the
distinctive flavours highlighted by this series: Atlantic sea salt,
peat smoke, sweetness and citrus fruits.
AN OCEAN OF FLAVOUR
Aged in ex-bourbon casks, the first release in this highly
anticipated new series will highlight Bowmore®’s distinctive salty
flavour profile with notes of salted honeycomb and Atlantic sea
spray perfectly balanced with notes of sun-ripened fruits, zingy
spiced cocoa and blood orange. Created using hand selected casks
to create a refined liquid of greater depth, Bowmore® Vault
Edit1°n Atlantic Sea Salt reflects the distinctive climate in the
depths of the No. 1 Vaults. This sublime whisky is awash with
blackberry, sea salt and kumquat offering a lasting finish that
opens out like the vast Atlantic Ocean that the Bowmore® distillery overlooks.
Bowmore® Vault Edit1°n Atlantic Seat Salt will be available at specialist whisky retailers, as part of a fourpart
limited edition series, one of which will be released each year between now and 2019. The next
release in the Vault Edit1°n series will be Vault Edit1°n Peat Smoke.