Shop Online for Those Exceptional, Collectable and Rare Expressions 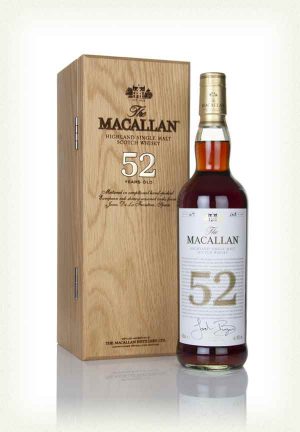 Yes, you read that correctly. This is a bottle of Macallan single malt Scotch whisky that has matured for at least 52 years. Drawn from a first-fill European oak sherry seasoned cask, this whisky has very patiently aged for over half a century, and bottled with an outturn of 250 bottles. Extraordinarily rare stuff from the much-adored distillery in Speyside.

A very rare and collectible bottling of Macallan single malt. This bottling was created back in 1996, honouring the 35th anniversary of the satirical magazine Private Eye. That’s certainly one way to celebrate.

The Macallan No.6 in Lalique Decanter – Click To Buy! 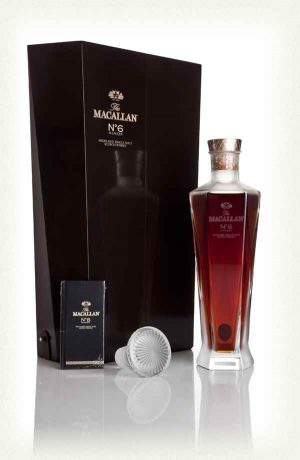 The Macallan No.6 Lalique Bottling Note 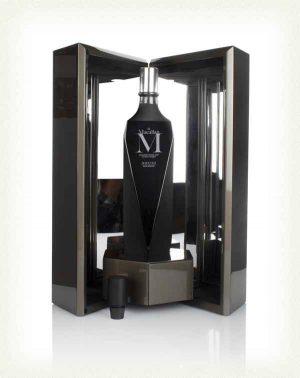 It’s the 2018 edition of The Macallan M Black, which shows off an intriguing, smoky side of the distillery’s whisky. The immensely stylish black crystal decanter is made by Lalique, a reference to the darker, richer flavour profile of the whisky. 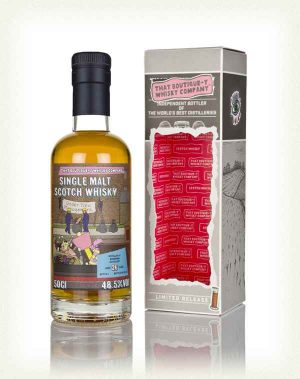 Rare 26 year old Rosebank single malt scotch whisky, independently bottled by That Boutique-y Whisky Company! Rosebank closed back in 1993, but is one of a handful of distilleries that are due to reopen in the near future – and the label shows some busy workers getting Rosebank ready! Of course, a lot of the work will be chucking out all of the stuff from when it was last open in the ’90s, like that Pog collection or that toy of Bully from Bullseye. Y’know, distillery things.

‘That Boutique-y Whisky Company’ bottles single malts, single grains and bourbons from a variety of renowned distilleries as well as producing award-winning blended malts and blends. These whiskies are adorned with cultish graphic novel-style labels. 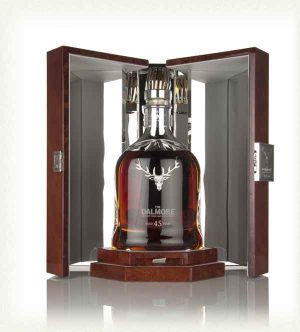 …If those words aren’t quite enough to make you gaze longingly at your computer screen with your eyes impossibly wide like a famished cartoon character trapped on a desert island confronted with an oversized leg of ham, here are some more details for you. This expression was initially aged in bourbon casks, before being transferred over to a pair of Graham’s Port Colheita pipes, then married together in first-fill bourbon casks. The whisky was selected by Dalmore master distiller Richard Paterson. Only 500 bottles were produced, presented in Baccarat crystal decanters. 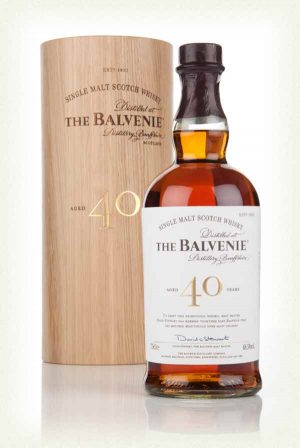 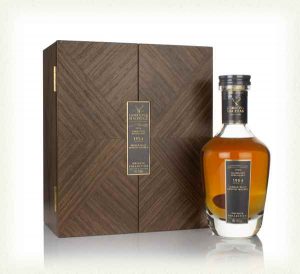 An impressively well-aged Glenlivet, bottled at a smashing 64 years old. After it was distilled in 1954 (the very same year that Ian Fleming published Live and Let Die, don’t you know), the single malt was left for more than six decades in a single refill sherry cask. Gordon & MacPhail bottled it up in 2018 for the Private Collection, with 222 bottles released at 41% ABV, complete with striking wooden presentation case. 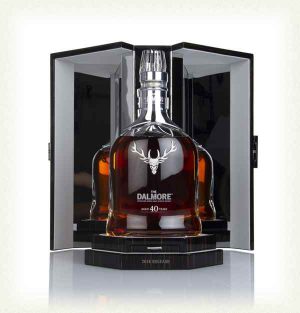 A superb single malt from Dalmore in the Highlands, matured for a massive 40 years! Yes, this expression endured four whole decades of maturation, taking place in American oak bourbon barrels, Matusalem Oloroso Sherry butts and first-fill bourbon barrels. Dalmore is known for its full-bodied whiskies, and we’re certain this one lives up to that reputation. As you might expect for a whisky of this distinction, it comes with a very fancy presentation case. 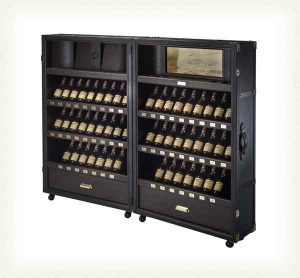 The Glenfarclas Family Cask Trunk is a spectacular addition to the Glenfarclas’ Family Cask collection, believed to be the most expansive single collection ever released by one distillery. Hardly surprising, considering it contains every vintage made by the Speyside distillery between 1954 and 2003 – that’s 50 (fifty!) 200ml bottles of Glenfarclas goodness!

But that’s not all. The unique collection is housed in a custom-made trunk, modelled on old shipping luggage, jam-packed with plenty of awesome Glenfarclas extras. Extras like a replica of the oldest known painting of the distillery (the original from 1791, which now hangs in the Glenfarclas Private Dining Room); four slate coasters; and three hand-printed and bound leather books – one with tasting notes for each vintage from George Grant, another for your own tasting notes, and one with information on the history of the distillery.

Oh, and it also includes four tumblers, four nosing glasses and a water jug, all made by Glencairn Crystal. The Glenfarclas Family Cask Trunk is a bit like Mary Poppins’ handbag, only miles better. Only 60 have been released worldwide, because life isn’t fair. 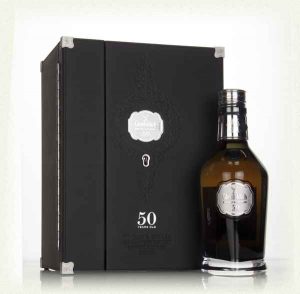 50 year old single malt from one of the most well-respected Scotch whisky distilleries – Glenfiddich. This extraordinarily well-aged expression was drawn from a pair of casks which slumbered the extensive Glenfiddich warehouses for half a century, and married together for six months in an American oak barrel by Malt Master Brian Kinsman. It comes presented in hand-blown bottles alongside an aptly decadent presentation case. Frighteningly rare and exciting. 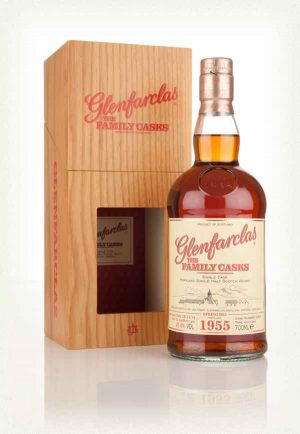 Distilled in 1955 and bottled in late November 2014, this Glenfarclas single malt is around 60 years old! Phenomenally aged in a single Sherry butt, the outturn of which was 544 bottles.

“I will forgive the tiredness as the oak gains hold. It is natural and to be expected. Instead I will savour those fruity depths on both nose and delivery and the beguiling development of the faint honey notes which guarantee and maintain the complexity to be found. This, after all these ridiculous years, is imperfect perfection.” – Jim Murray (95.5 Points) 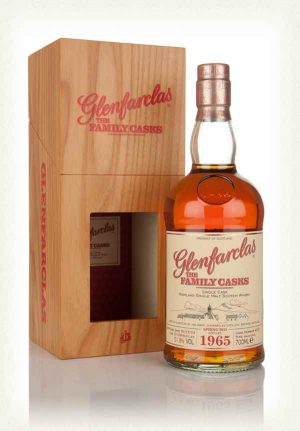 Bottled in December 2014, this stunning single cask Glenfarclas whisky spent nearly fifty years in a Sherry butt before being bottled as part of the distillery’s Spring 2015 releases. The outturn was just 358 bottles. 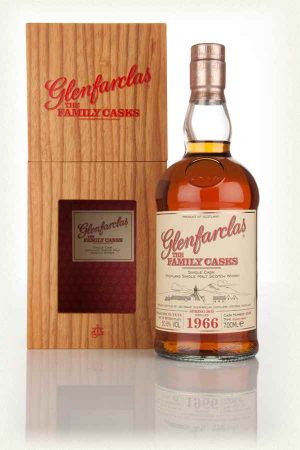 Ah, Glenfarclas Family Casks. Glorious whiskies. Dream whiskies. Here we have one distilled back in 1966 and bottled in December 2015 after almost half a century in a single Sherry butt! Part of the distillery’s Spring 2015 releases. 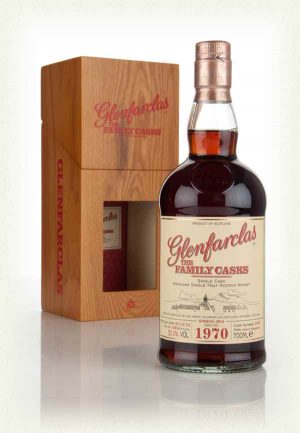 Goodness gracious, would you just look at the Glenfarclas Family Cask bottling! This single malt from the long-going family-run distillery was distilled in 1970 and matured in Sherry hogshead #2026 until December 2014 – and it certainly looks the part, doesn’t it? Just 148 bottles of this were produced, presented at 53% ABV, which is rather impressive for its age.

A marriage of whiskies distilled in 1948 and 1961, the years that Prince Charles and Lady Diana were born. It was bottled and released in 1981, of course, the year of the Royal wedding.